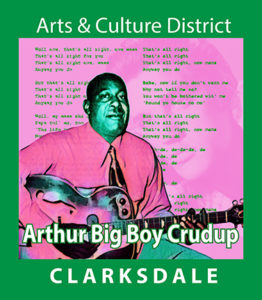 Arthur “Big Boy” Crudup wrote “That’s All Right,” the first song Elvis Presley ever recorded.  He was born in the south Mississippi Delta and settled in Clarksdale in the mid-1920’s, where he began his music career.  His roots as a songwriter are here; Clarksdale was his musical proving ground. He sang the blues and a lot of gospel, and in the late 1930’s he got the attention and became a member of the gospel quartet, The Harmonizing Four, which led him out of Clarksdale to Chicago in 1939.

Crudup barely made a living in Chicago, but happenstance changed all of that when he met record producer, Lester Melrose.  He was then introduced to Tampa Red, and out of that eventually came  “That’s All Right” (1940, later to become “That’s All Right, Mama.”)

Elvis recorded “That’s All Right” in July 1954; he was 19-years old at the time. It was his fifth session at Sun Studios (Sam Phillips finally found a young white man who could sing like a black man).

In addition to “Rocket 88” coming out of Clarksdale, Arthur Crudup’s Clarksdale legacy and his contribution to Elvis’ beginning is another cornerstone in Clarksdale’s place in the birth of rock ‘n’ roll.