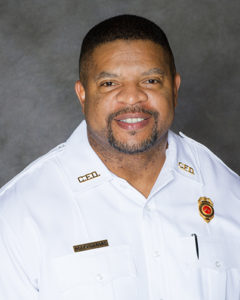 Chief Rocky Nabors started his career with the Clarksdale Fire Department in October 1992 as a entry level fireman. He rose through the ranks as Lieutenant and Captain .  In June of 2016 Nabors was promoted to Training Officer.  As of September 2017, Nabors was appointed Chief by the Mayor and Board of Commissioners. The Fire Chief directs over 40 dedicated and certified professionals who are located at three Fire Stations.  Clarksdale has a State Fire Bureau rating of”5″.  The Fire Chief is responsible for administrative, supervisory and professional public safety assistance work in planning, coordinating and directing the activities and operations of the Fire Department.

The Chief formulates programs or policies to alleviate deficiencies. He also supervises and coordinates the preparation and presentation of an annual budget for the fire department and directs the implementation of the department’s budget. He controls the expenditure of departmental appropriations. The chief also handles grievances, maintains departmental discipline, conduct and general behavior of personnel under his command. The Fire Chief works under the general guidance and direction of the Board of Mayor and Commissioners. 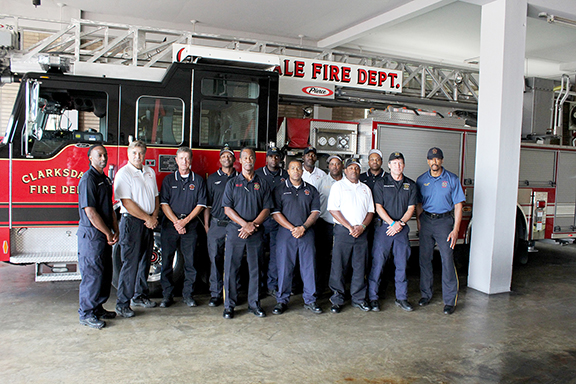 The Clarksdale Fire Department operates three fire stations with 42 Firefighters 24-hours a day, seven days a week.  There’s help when you need it and they will be there quick. They are the primary respondents to accidents anywhere in the county and are available for help outside the jurisdiction any time they are needed.

In addition to fighting fires and responding to emergencies, the department, officers, and men are involved in teaching the community safety instruction and information.  The Chief, his staff, and Clarksdale firemen speak at local schools and all community service clubs that ask for a program. They would much rather have a safe environment, and far fewer emergencies to attend. Chief Rocky Nabors and some of the Clarksdale firemen in front of City Hall.