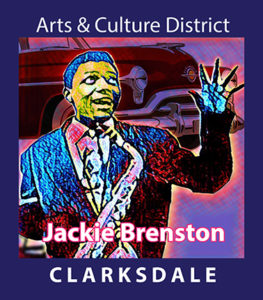 Jackie Brenston was a R&B singer and saxophonist from Clarksdale.  In the early 1950’s he played with Ike Turner’s band, The Kings of Rhythm.   Jackie co-wrote and sang “Rocket 88,” the first rock ‘n’ roll song ever recorded.

Local success and a friendship with B.B. King led Ike and his Kings of Rhythm to the attention of studio owner Sam Philips in Memphis, Tennessee.  At Philips “Memphis Recording Service,” the predecessor to Sun Studios, The Kings of Rhythm recorded several records in early 1951, including “Rocket 88,” on which Brenston sang lead and was credited with writing.

Phillips passed the recordings on to Chess Records in Chicago, which released “Rocket 88” as by “Jackie Brenston and his Delta Cats”, rather than under Turner’s name. The record soon reached Number 1 on the U.S. Billboard R&B chart and stayed at that position for over a month. Phillips later claimed that this was the first rock and roll record. That claim has often been repeated by others, although there are numerous other candidates. Phillips used income from the success of the record to start Sun Records the following year.