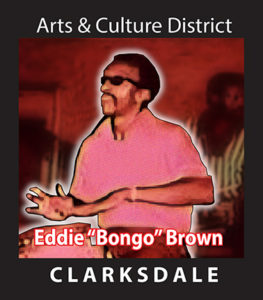 Eddie Brown is Clarksdale’s connection to Motown.  He was born in Clarksdale and played bongos, congas, the gourd, and claves.  He honed the foundation of his career in Memphis, and it may have been there that he became known as Bongo Eddie.

After Memphis, Eddie made his way to Detroit where he became a member of the famous in-house band, The Funk Brothers.  Eddie’s most revered performances there were with the Temptations, Smokey Robinson, and Gladys Knight.  He played on such songs as “I Second that Emotion,” “(I Know) I’m Losing You,” and “If I Were Your Woman”.