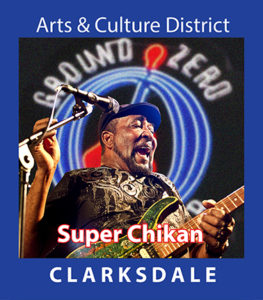 Chikan regularly performs at Clarksdale’s Ground Zero Blues Club, where he is owner Morgan Freeman’s favorite bluesman. In addition to his thriving blues music career, Chikan is also a respected artist. He plays on colorful homemade guitars which have become treasured artifacts and keepsakes for many of his fans and supporters.  He also has numerous recordings, “Blues Come Home to Roost,” “What You See,” “Shoot That Thang,” and “Chickadelic” on Blues Town Records.