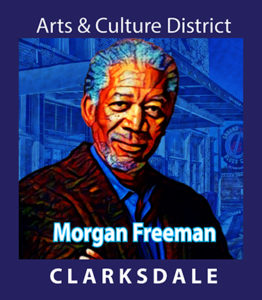 Morgan Freeman is an owner of Ground Zero Blues Club in Clarksdale and the former owner of a high-end restaurant here in town as well.  He has contributed much to the art and culture here for decades.  (Yes, from time to time our visitors just might meet him around town.)

Freeman is, of course, one of our country’s most acclaimed and celebrated actors.  He is an Academy Award winner, multiple-time Oscar nominee, Golden Globe winner and Screen Actor’s Guild Award winner.  His most notable performances are in some of the greatest motion pictures ever made:  Driving Miss Daisy, Million Dollar Baby, Unforgiven, Glory, Invictus, and The Shawshank Redemption.

From Memphis and a resident of nearby Charleston, MS, Freeman is also a pilot and a notable beekeeper.  He is a partner of former Clarkdale Mayor, Bill Luckett on numerous ventures.  His charitable work includes Clarksdale projects, hurricane and storm relief, environmental awareness and to a Mississippi State University horse park.

His well-known comments on civil rights and racism are both notable and consistent with Clarksdale’s continuing social progress today. For example, Freeman does not enjoy talking about Black History Month… because black history is “American History.”  He suggests that the way to end racism is to stop talking about it, and we should stop referring to people by a color.