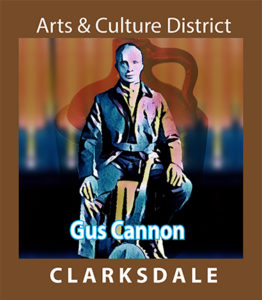 Gus Cannon moved to Clarksdale in the late 1890’s. He was important in making early jug bands popular. He played the banjo which he made out of a frying pan covered with raccoon skin. By the turn of the 1900’s, Gus was playing at sawmills and railroad camps in Clarksdale and throughout the Delta.

W.C. Handy’s band influenced Gus to learn to play the fiddle, and later he learned to play guitar with a knife blade as a slide. He later moved to Memphis and created his band, The Jug Stompers. By 1914-1915 he was playing the tent and medicine show circuit.

In 1927 Gus was one of the first to record out of the Delta (Blind Blake, an exceptional Piedmont-style blues guitarist, backed his first session).  Some of the better-known songs Gus performed are “Big Railroad Blues,” “Minglewood Blues,” “Pig Ankle Strut,” and “Viola Lee Blues” (later recorded by the Grateful Dead on their first album).  Perhaps Gus was best known for “Walk Right In,” a later hit done by the Rooftop Singers in the 1960’s and Dr. Hook and the Medicine Show in the 1970’s.