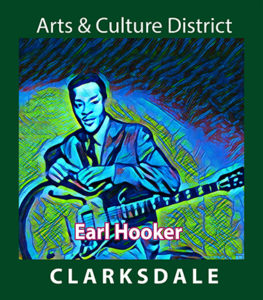 Earl Zebedee Hooker – was an early bluesman known for his slide guitar playing. He was born in Quitman County just south of Clarksdale and was a cousin of John Lee Hooker. Earl grew up in a musical family and started playing the guitar before he was 10 years old (this was about 1940).

Earl was certainly influenced by the blues players around Clarksdale that preceded him, and by the time he was a young teenager, he was playing on Chicago street corners with a childhood friend, Bo Diddley. In his mid-teens, T Bone Walker had an impact on Earl with both his guitar playing and stage presence, and later Earl added playing guitar behind his back and with his teeth into what became his stage act.

It was also in the early 1940’s that Earl became friends with Robert Nighthawk, the pioneer electric guitar bluesman. He also came to play with other bluesmen such as Sonny Boy Williamson II, Junior Wells, and his cousin John Lee Hooker.