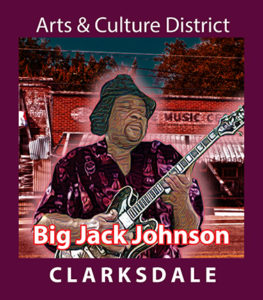 Clarksdale based Big Jack Johnson was once heralded by music critic Robert Palmer as “possibly the most original bluesman alive.”  Big Jack was a significant favorite here, and he expanded the range of his Delta blues, both instrumentally and topically.  A featured guitarist who also played mandolin, he featured blues songs about AIDS, war, domestic violence, abortion, Hurricane Katrina and a devastating 1994 ice storm that paralyzed Clarksdale for weeks on end.

When not on the road, Red’s Lounge in Clarksdale was Big Jack’s home base.  He was an uncle to Clarksdale bluesman and artist, Super Chickan.  He won a W.C. Handy Award in 2003.  His day job, as a driver for Shell Oil, led to his local nickname, “The Oil Man.”

Born in nearby Lambert, Mississippi, Big Jack came for a large family. He also had a large family himself having 13 children. His earliest musical influence was his father.  Because of his attraction to B.B. King, Big Jack began playing the electric guitar.

Among Big Jack’s bands were the Jelly Roll Kings and the Nighthawks.  Some of his records on various labels were Hey Boss Man, My Back Scratcher, Rockin’ the Juke Joint Down, and The Oil Man.