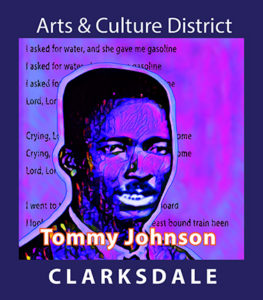 Tommy Johnson is one of the most significant pioneers of the blues. He is often associated with Charlie Patton and Willie Brown. Born in Crystal Springs, MS., Tommy’s connection to Clarksdale is more indirect than direct.  He likely played in town or around Coahoma County early in the emergence of the delta blues form, but that is not documented as to when or where.  What is known is Tommy played throughout the Delta in the 1920’s.  More importantly, however, were his collaborations with both Patton and Brown, and the influence that later had on Robert Johnson, Howlin’ Wolf, and the evolution of the blues in general.

It was Tommy Johnson who first created the Faustian myth about the devil and the Crossroads. Robert Johnson later adopted it from him.  If Clarksdale is the crossroads, that myth began with Tommy Johnson.

Tommy first learned to play the guitar around 1915. He later married and moved to a plantation near Drew, MS., which led him to meet both Patton and Clarksdale’s Willie Brown. By the early ’20’s he was back in Crystal Springs and made his first recording in 1928. Suffering from alcoholism, one of his first recorded songs was “Canned Heat Blues,” named after the sterno cooking fuel that Tommy often drank when he couldn’t find anything else better to imbibe.  The song includes the lyric, “canned heat, mama, sure, Lord, killing me,” which much later led to the band name of blues/rock group, Canned Heat.

Johnson recorded again in 1928 and 1929, but not again thereafter.  In total his discography is about 15 songs.  These made him the most accomplished Delta blues vocalist of his day, with a captivating voice that could go from a gnarling growl to an eerie falsetto.  His vocal style had a direct influence on both Robert Nighthawk and Howlin’ Wolf.  It was Tommy who wrote one of the most famous blues lyrics ever, “I asked for water, she gave me gasoline” which was found in his song “Cool Water Blues.”

In his later years, Johnson frequently collaborated with Charlie McCoy Ishman Bracey, and he had a notable influence on Houston Stackhouse.