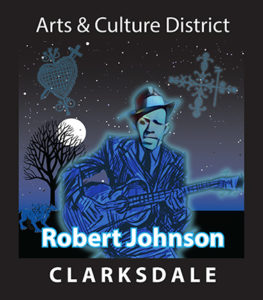 Along with Muddy Waters, Robert Johnson is one of the most important bluesmen ever.  During his brief life, Robert Johnson was frequently in and around Clarksdale.  With his second wife, Caletta, he lived here in 1932.

Though not documented precisely when and where Robert certainly played music in Clarksdale in the 1930’s.  Sometimes he even played here with Howlin’ Wolf and others as well.  What’s more important as it relates to Clarksdale is Robert’s musical style grew from Clarksdale.  His most important influences were the two greatest early Clarksdale bluesmen ever, Son House and Willie Brown.

Born in Hazelhurst, MS south of the state capitol in Jackson, Robert moved to the area around Tunica, MS in 1919. Two years older than Muddy, and a year older than John Lee Hooker, Robert was a youngster when he first settled into the Delta.  Friends who knew him said Robert played both the harmonica and jaw harp; they did not mention that he played the guitar at that time.

Robert only recorded 29 songs.  The recordings were set up by Jackson, MS mercantile store owner, H.C. Speir (who also set up Son House’s and Charley Patton’s first recordings), and were recorded in San Antonio and Dallas, TX in 1936 and 1937.  They show a writing and playing skill of such complexity and talent that Robert continues to influence musicians to this day. Along that way, Robert greatly impacted the careers of Eric Clapton and Keith Richards, among countless others.

Robert’s songs are legend: “Come On In My Kitchen,” “Kind Hearted Woman Blues,” (which was a departure from the Delta style) “I Believe I’ll Dust My Broom,” “Cross Road Blues,” “Terraplane Blues,” “Last Fair Deal Gone Down,” “Hellhound on My Trail,” and “Love in Vain Blues.” Eric Clapton has called Johnson “the most important blues singer that ever lived.”

In 1986, Robert Johnson was inducted into the Rock and Roll Hall of Fame in its first induction ceremony as an early influence on rock and roll. In 2010, he was ranked fifth in Rolling Stone magazine’s “100 Greatest Guitarists of All Time.”  Four of his songs, “Sweet Home Chicago,” “Cross Road Blues,” “Hellhound on My Trail,” and “Love in Vain Blues” are included by the Rock and Roll Hall of Fame in its list of the 500 most important songs of all time. He won a Grammy Award for Best Historical Album in 1990. In 1998, he was inducted into the Grammy Hall of Fame for Cross Road Blues.