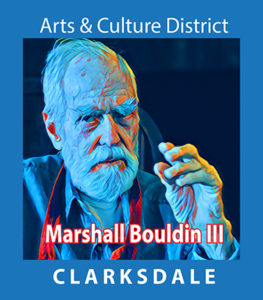 Marshall Bouldin III was a nationally acclaimed American portrait artist.   Known as “the South’s foremost portrait painter” by the New York Times, Marshall’s oil portraits and paintings are found in more than 400 art collections across the country.  He was the first painter inducted into the National Portrait Artist Hall of Fame of the Portrait Society of America.

A resident of Clarksdale, Bouldin was born in nearby Dundee, Mississippi, near the Mississippi River.  Like most from the Mississippi Delta, his work started working cotton for his family, and later he became a professional portrait painter in the 1950’s.  Throughout his career, he painted more than 800 individuals, many of whom were nationally known.  His subjects included congressmen, senators, governors, and members of presidential families. Some of which were U.S. Congressman Jim Wright from Mississippi, Mississippi Governor William Winter, and United States Senator John C. Stennis from Mississippi.  He also painted Tricia Nixon Cox, Julie Nixon Eisenhower, and William Faulkner.

Check out this documentary film that features Marshall here.