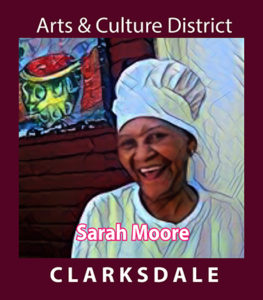 Sarah Moore was known as “Miss Sarah” to Clarksdale.  She was the beloved owner of Sarah’s Kitchen, a treasured down home juke joint, bar, and restaurant that was on Sunflower Ave. in historic downtown Clarksdale.  Her gracious spirit, smile, and attitude were a help and inspiration to all.

Sarah’s Kitchen was among the earliest and most important music venues to appear in the resurgence of the blues into contemporary Clarksdale.  The food was both authentic and amazing; Sarah’s place was considered by scores as their favorite juke in the Delta.  The blues on the jukebox there was a destination in itself.