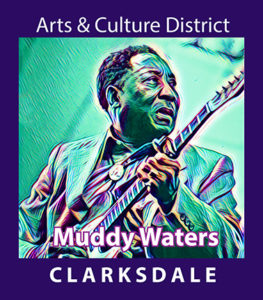 Perhaps no other blues musician has had as much influence on contemporary music culture than Muddy Waters. His effect on blues, rhythm and blues, rock and roll, hard rock, folk music, jazz and country music is without parallel.

Born McKinley Morganfield in Rolling Fork in the south Mississippi Delta, Muddy came to Clarksdale about the time he was first learning to walk and talk. He grew up on the Stovall Plantation on the outskirts of Clarksdale, and his most important musical influence was Son House.  Charlie Patton, Willie Brown, and others also contributed to Muddy’s background as well.

Alan Lomax first recorded Muddy at Stovall Plantation for the Library of Congress in 1941. These field recordings are legend, and they were an important launching point for Muddy’s transformation into what would later be cited as the “father of modern Chicago Blues.”

Muddy moved to Chicago in 1943 (at age 30). His first hit record, “I Can’t Be Satisfied,” appeared in 1948. Recording under contract for Chess Records, Muddy’s electric band (with Little Walter Jacobs on harmonica, Jimmy Rogers on guitar, Elgin Evans on drums and Otis Spann on piano) established urban blues, and it is considered transformative to the beginning of rock and roll (many claim that rock pivots on the shoulders of Son House and Muddy Waters).

With his songs and those of songwriter and bass player, Willie Dixon, Muddy has a vast catalog of the most influential and important blues songs ever recorded. (It is from Muddy’s song. “Rollin’ Stone,” that The Rolling Stones got their name.)

Muddy won 6 Grammy Awards. He was inducted into The Rock and Roll Hall of Fame in 1987, and the RRHOF listed four of his songs that shaped rock and roll (“Rollin’ Stone,” “Hoochie Coochie Man,” “Mannish Boy” and “Got My Mojo Working”). He is in the Blues Hall of Fame and was given the Grammy Lifetime Achievement Award in 1992.