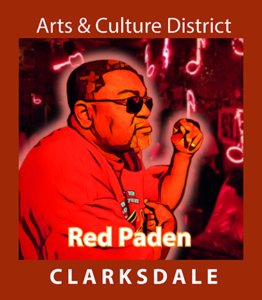 Red Paden is the colorful owner of Red’s Lounge, an authentic juke joint here in Clarksdale.  A must stop on the tour of the birthplace of blues and rock ‘n’ roll. Red’s is a small room with a few scattered tables and a cooler full of beer.  Lights are strung around the ceiling like every day is Christmas, neon music notes pulse on the walls, real-life Delta bluesmen are playing,  Red’s is an everyday-is-a-holiday-feeling kind of place. It’s truly the real deal!

Even more real and down-home is Red himself.  He’s almost always in his lounge, and meeting him is another Clarksdale treasure.  He’ll tell you that blues is his heritage, that he grew up on the blues. He will tell you that the blues are about the trials and tribulations that one goes through.  He’ll also add that when one sings the blues, the day goes by quicker.

Red is nationally recognized and cherished.  He has been honored by the Blues Foundation with its prestigious ‘Keeping the Blues Alive Award.’  He is the father of State of Mississippi Legislator Orlando Paden.  His great friend was The Oil Man, bluesman Big Jack Johnson.

Esquire Magazine has cited Reds as ‘the best place in America to hear blues’ in the country.  Red has also been featured in the Los Angeles Times, National Public Radio, Clarksdale website The Delta Bohemian, The Delta Blues Museum, The Clarion-Ledger in Jackson, MS, and more.