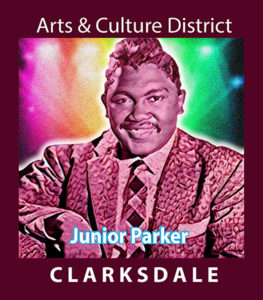 Herman “Junior” Parker was a blues singer and musician.  Some accounts have him from Clarksdale, but he was actually born near Bobo, MS about 10 miles outside of town.  He was known for his exceptionally unique voice, which was often compared to “honey” and “velvet.” He was inducted into the Blues Hall of Fame in 2001.

Junior sang in gospel groups as a child. One of his early influences was Sonny Boy Williamson, who he eventually played with in Sonny’s band.  Junior also played with Howlin’ Wolf in the late ’40’s. Later, Junior eventually became a member of the Memphis group, The Beale Streeters. Two of his bandmates then were Bobby ‘Blue’ Bland and B.B. King.