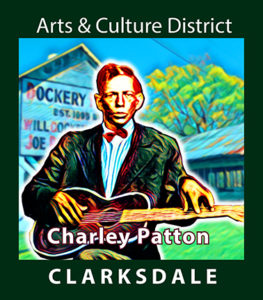 Charley Patton is considered by many to be the “Father of the Delta Blues.” He was born in 1891 in Edwards, MS and is forever associated with Dockery Farm’s Plantation outside of Cleveland, MS.  Charley has a few connections to Clarksdale.  Important was Patton’s patronly influence on Clarkdale’s Willie Brown and Son House.  This was somewhat due to Charley being older than all other major delta blues pioneers, and that he helped many play the guitar in his Delta blues style as well.

Patton was responsible for both Brown and House having their first delta blues records recorded here in Clarksdale. These seminal recordings were made at a studio in a furniture factory in Grafton, Wisconsin, which were initially set up by Jackson, MS talent scout H.C. Speir and Patton, who was solely responsible for Brown and House to be involved.

Perhaps Charley’s most direct blues tutelage was with Howlin’ Wolf, but he influenced most of the other great delta blues artists as well.  They include: Son House, of course, Tommy Johnson, Robert Johnson, Mississippi Fred McDowell, Johnny Shines, Bukka White, his wife Bertha Lee, Muddy Waters and more.  As such, many historians and musicologists consider Patton one of the most important American musicians in the 20th Century.

Patton lived most of his life in the Cleveland area on or around Dockery (but he did ramble). His parentage and race are uncertain.  He was considered to be African American, but his especially light complexion suggest caucasian and/or native American ancestry as well.  Howlin’ Wolf thought Charley had a lot of Cherokee in him.

Before he was 10 years old, Patton moved to Dockery Farms.  He developed his early delta blues style there under the guidance of Henry Sloan.  (Back then it was all on heavy string gauge acoustic guitar; the electric guitar was still a long way away.)

Patton met both Willie Brown and Tommy Johnson at Dockery.  They played there and nearby plantations.  During that time, which was likely through much of the 1920’s, he also met Robert Johnson and Howlin’ Wolf.  Back then Patton played deep blues, of course, but hillbilly, ballads, and country dance music were always in his performing mix.

Unique to Patton was his musical showmanship.  Spiritedly, like he might be possessed, he played with his guitar on his knees, behind his back, on his head, behind his head, and his voice was LOUD.  His audiences were mesmerized, and it was this captivating style that also so much impacted Howlin’ Wolf.

Charley eventually became popular across the southern United States.  In the ’30’s he also played in both Chicago and New York, but his widening popularity came from Charley’s musical roots– he became known from playing at plantations, turpentine and logging camps, jukes, taverns, and local parties across the Mississippi Delta.

Around 1930, Lula, MS became important to the evolution of the Delta blues.  About 15 miles north of Clarksdale, Patton lived in Lula for a time after being expelled from Dockery Farms.  Son House also settled in Lula about the same time.  Wherever Charley and Son went, Willie Brown was not far behind, and it was in Lula that the deep blues continued to mature from their constant influences and collaborations with each other.

Patton finally settled in Holly Ridge, Mississippi, with his common-law wife and recording partner, Bertha Lee, where he passed away in 1934.  A memorial marks his gravesite, which was donated through the Mt. Zion Memorial Fund, paid for by John Fogerty (Creedence Clearwater Revival).