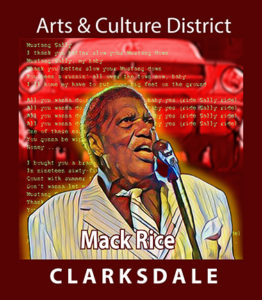 Rice grew up in Clarksdale and moved to Detroit when he was seventeen.  One of his first bands included members Wilson Pickett, Eddie Floyd and Joe Stubbs.  His biggest successes came later as a songwriter for artists on Stax and Motown records.

Mack had initial record chart success as a solo artist with “Mustang Sally.” but his song is best known by his friend, Wilson Pickett.  He also had soul music chart success with his song “Coal Man.”

Rice’s song “Respect Yourself“ was a major inspirational hit for the Staple Singers.  The song personified the self-empower movement for African-Americans during the post-civil right movement in the 1970’s.  Some of his other songs include “Cheaper to Keep Her,” “Money Talks,” “Cold Women With Warm Hearts,”Do the Funky Penguin,” “Pt. 1,” and “It Sho Ain’t Me.”