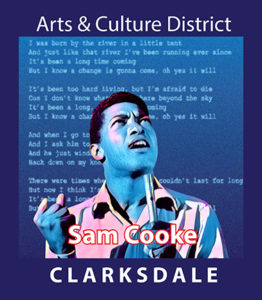 Sam Cooke is one of the most important performing artists ever.  Clarksdale born, he is often known as the King of Soul.  He is a charter member of the Rock and Roll Hall of Fame (he was inducted with Elvis, The Everly Brothers, Chuck Berry, Ray Charles, Jerry Lee Lewis, Little Richard, Fats Domino, James Brown and Buddy Holly).

As the founder of both a record label and a publishing company, Sam was also among the first African American musical artists of his era to master the business side of his musical career.

Of great social importance in the early 1960’s, Sam also was a pioneering figure in the Civil Rights Movement. His “A Change is Gonna Come“ was both protest song and a top 40 hit, and it is still considered a vital civil rights statement today, some 53 years after its release in 1964.

Sam’s father was a reverend in the Church of Christ in Clarksdale.   Sam began singing spirituals with his brothers in a group called The Singing Children when he was 6 years old. His first record release was “You Send Me.