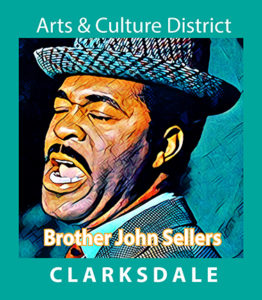 Clarksdale born Brother John Sellers was an acclaimed blues, jazz, gospel. and folk singer.  He started his career path as a toddler, often by watching bluesmen on the streets of Clarksdale, one of whom was Robert Johnson.  By age 5, Sellers was dancing, singing, and playing the tambourine in tent shows put on by the Sanctified church, whose worshipers were known as Holy Rollers.

By the mid-1930’s when he was about ten years old, John lived in a bordello after being separated from his parents.  About that time he was discovered by the gospel singer Mahalia Jackson, who took him with her to Chicago, where he lived with Jackson and with relatives of his mother.

As Mahalia’s career began to blossom, Sellers was performing with her, and he sometimes even filled in for her on concert dates. He also attached himself to the blues singer Big Bill Broonzy, with whom he studied and later played with on stage, particularly in Europe in the late 50’s where he and Big Bill found significant success.

In the mid-1950’s, Mr. Sellers made two well-received recordings for a jazz line of Vanguard Records.  There he worked with Sonny Terry and others.  He moved to New York in the ’50’s and his career much expanded there.  Brother John became a regular at Folk City, a Greenwich Village nightclub, where Sellers became a regular in the Village’s folk revival scene among tour-de-force folk singers also got their start, such as Joan Baez, Bob Dylan, Paul Simon and Art Garfunkel

Also in New York, Sellers began his important longtime partnership with Alvin Ailey, who he worked on many Alvin Ailey American Dance Theater theatrical shows and performances.  He also became involved on Broadway with both Langston Hughes and his long-time friend, Studs Terkel.  Terkel said of Brother John, “he had a light tenor voice that was very strong” and Studs added, “the sinful and the secular could be heard in his singing.”  This especially included Brother John’s take on “Wading in the Water,” where Terkel said “one got the feeling of the young preacher inviting the people into the shallow waters, that they had to do it because if they did, they’d be found, they’d be saved. Brother John had this way of making things come alive.”