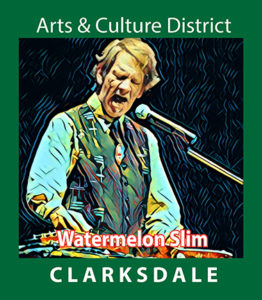 Massachusetts born, and formerly Oklahoma based blues talent, William Homans relocated to Clarksdale in 2009.  Professionally known as “Watermelon Slim,” Bill is a consummate entertainer with a widespread following. When not on the road, he regularly plays at the Blues Cafe here and other local venues to devoted enthusiastic audiences.  Both a master guitar and harmonica player, a Watermelon Slim performance is an authentic blues triumph.

Slim is one of those musicians who has the gift of having perfect pitch, but behind his talent is a surprisingly eclectic background.  He graduated from the Massachusetts boarding school, has a degree in journalism and history from the University of Oregon, and a Masters in history from Oklahoma State University.  He also dropped out of another college at one point to enlist in the Vietnam War, where he came back as a strong anti-war activist.  A member and supporter of the Vietnam Veterans Against the War was Slim’s way of somewhat repeating his father’s legacy; his dad was an attorney for the Freedom Riders of the early 1960’s civil rights era.

Bill has performed with notable musicians, John Lee Hooker, Robert Cray, Bonnie Raitt, Country Joe McDonald, and with Canned Heat, among others.  His first album, Merry Airbrakes, recorded in 1971 after he came back from Vietnam, had songs about a spiritual journey, drug use, and the emotional toll of fighting in a war.  Currently, his music overflow is rooted in deep delta blues.

One of Bill’s early bands was “Fried Okra Jones,” based in Oklahoma with two university philosophy professors as bandmates.  Together they recorded his second album, named after their fun-named band.

Bill’s impressive career awards and accomplishments are numerous.  Some of these include: he was nominated for the W.C. Handy Award as best new artist in 2005;  he and his band “The Workers” were nominated for six more W. C. Handy Awards and a Maple Blues Award from  the Toronto Blues Society in 2006;  he won The 6th Annual Independent Music Awards for Best Blues Album and Album of the year in 2007; his CD Wheel Man was nominated for six more Blues Music Awards in 2007 and won for Best Blues Band the following year;  he won the Maple Blues Award for B.B. King International Entertainer, and The Wheel was also the No. 1 Blues Album in England’s Mojo Magazine;  he was inducted to the Oklahoma Blues Hall of Fame in 2008 and he was nominated for four more Blues Music Awards in 2009.

Slim has also collaborated with other Clarksdale bluesmen, including current bluesman Super Chikan and former bluesman Robert Belfour and more.  His music has been featured in films, and on the blues festival circuit, where he regularly performs.