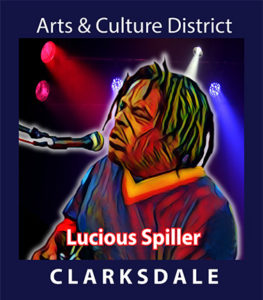 Consummate contemporary bluesman Lucious Spiller is not from here, but Clarksdale attracted him by 2014, and he lives here in the birthplace of the blues and rock n’ roll now.  Like other bluesmen that regularly play in Clarksdale, Lucious is one more performer who is as good a bluesman today… as there was before.  Watching Spiller entertain, one can easily imagine a blues performance in the 1930’s; Lucious is just that real.

Spiller is from St. Louis.  He started playing in church on a guitar his father gave him. His family had music history:  his father was a musician; they were founders of “Black Prairie Blues;” his uncle was blues great Magic Sam; Eddy Clearwater is a cousin, and the family has a historic marker on the Mississippi Blues Trail in Macon, MS. 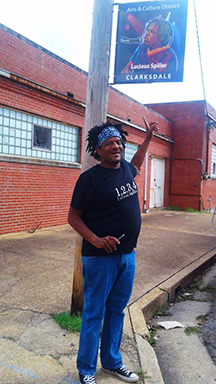 Lucious is an International Blues Challenge award winner and has been featured in the documentary film, Moonshine, and Mojo Hands.  He has frequented the KFFA “King Biscuit Time” radio show, performed on the Thacker Mountain Radio Hour, been featured on National Public Radio (NPR)  and helped begin the inaugural Americana Blues Triangle tour.

According to Spiller’s bio, he is deep blues and gospel-rooted. Living Blues Magazine has cited him as a “driving force for the blues” and the Associated Press said this about him, “Red’s Lounge in Clarksdale showcases under-the-radar, brilliantly talented musicians like Lucious Spiller, whose performances will make you realize why the blues still matter.”