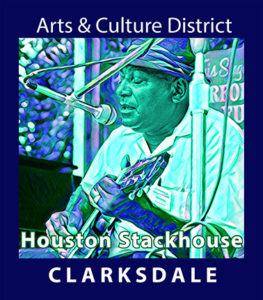 Houston Stackhouse was a blues guitar player and singer who is best remembered for his teachings and collaborations with blues great, and his distant cousin, Robert Nighthawk.  He was born in 1910 on a plantation in Wesson, MS and moved early to Crystal Springs where he met and learned to play guitar from blues pioneer, Tommy Johnson.  His connection to Clarksdale was multi-fold:  he worked and played in the area with many, he frequently played here on important blues and R&B radio station WROX; he often played in Clarksdale jukes such as the old Green Spot, and he was a regular guest at Clarksdale’s famous Riverside Hotel.

Unlike most of the bluesmen who started playing in the Delta then left for Chicago or places elsewhere, Stackhouse did not move on, and he performed throughout his life in and around the Mississippi Delta (with only a few performances in Europe and elsewhere).  In addition to his exposure to Tommy Johnson, his early influences were also Piedmont style blues master Blind Blake, Texas’ Blind Lemon Jefferson and Lonnie Johnson.  By his early 20’s, Houston was already playing around the Delta with The Mississippi Shieks, Robert Johnson, Charlie McCoy, and of course Robert Nighthawk, who he taught to play the guitar.

By the mid-’40’s Stackhouse had moved to Helena, Arkansas (about 15 min from Clarksdale) where he became a member of Nighthawk’s band.  After that, he played with drummer “Peck” Curtis, guitarist Joe Willie Wilkins and Pinetop Perkins.  His performances on “King Biscuit Time” eventually included Sonny Boy Williamson II (Rice Miller), and this led to Stackhouse and Sonny Boy playing across the Delta, and in and around Clarksdale as well.

As a teacher, Stackhouse was a guitar tutor for bluesman Jimmy Rogers, who became a founding member of Muddy Waters Electric Band.  He recorded with Sonny Boy Williamson II, recorded with both “Peck” Curtis and Nighthawk as a member of The Blues Rhythm Boys, and later played and performed with a distinction out of Memphis.

Houston has a marker honoring him on the Mississippi Blues Trail, and the acoustic stage at the annual Arkansas Blues and Heritage Festival is named after him as well.