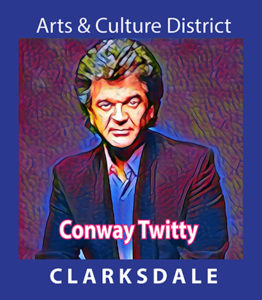 Conway Twitty was an American music singer who had important commercial success in multiple music genres, rock ‘n’ roll, R&B, and more significantly, country.  Born in Friars Point, MS outside of Clarksdale, Twitty first made it as a bluesy rockabilly star.  By the 1970’s he evolved into one of the country’s bestselling ballad singers ever.

Twitty had 55 No.1 country singles, many of which he wrote.  He had five hits in duet with musical partner Loretta Lynn.  Part of Conway’s success was he added drama, sensuality and heartfelt emotion into the country music form.  Both in live performances and on his records he developed into what his many ardent fans called him as “The High Priest of Country Music.”