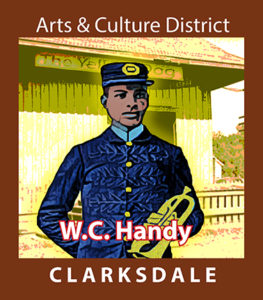 William Christopher Handy “found” the blues early. He was one of the first to describe the blues, and as such he is sometimes thought of as the ‘father of the blues.” He was a composer, musician, bandleader, and Clarksdale resident in the early 1900’s.

Born in Alabama, Handy traveled to the Mississippi Delta at the turn of the century (around 1902) to study various styles of popular music. What he heard then was mostly on banjo, guitar, and rarely on a piano (Gus Cannon was playing around Clarksdale at the time).

In 1903 he moved to Clarksdale to became the director of a black band organized by the Knights of Pythias. In that same year, he documented one of the most well-known observations ever made about the beginning of the Delta Blues form. While waiting for a train in nearby Tutwiler, Handy observed:

“A lean loose-jointed Negro had commenced plunking a guitar beside me while I slept… As he played, he pressed a knife on the strings of the guitar in a manner popularized by Hawaiian guitarists who used steel bars….The singer repeated the line three times, accompanying himself on the guitar with the weirdest music I had ever heard.”

Handy lived in Clarksdale for six years or so, then he moved to Memphis to form the W.C. Handy Orchestra. Some of his most known songs are “Memphis Blues,” “Beal Street Blues,” and “St. Louis Blues.” He was a founding father in elevating the blues out of the Delta into what became one of the most significant forces in American music ever.