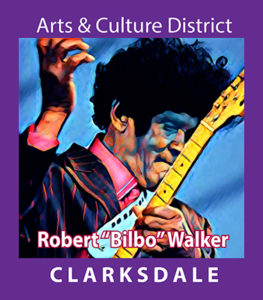 Robert “Bilbo” Walker Jr. is a highly entertaining bluesman who still performs rather regularly in Clarksdale.  Born here, Bilbo is known for his showmanship, his rocking Chuck Berry imitations, and for his flamboyant Las Vegas-style stage attire…and then there is his jet-black stage hair!

Robert was born outside of Clarksdale in 1937.  He got his “Bilbo” nickname from his father.  He began to play music after being introduced to Ike Turner.  As his musical talent matured, Bilbo spent a lot of time in Chicago with friend David Porter, then he moved to the Bakersfield, CA area.  There he started a farm and continued performing around there, and regularly in Chicago and Clarksdale thereafter.

A Bilbo performance continues to be an unpredictable, surprising, memorable event.  He’s always got a grand entrance, and he’ll play deep blues, rock, even bluegrass, and some country throughout a set.  His stage costume: Liberace….eat your heart out!

Robert is also known for creating the entertaining vehicles that get him to his gigs, including trucks, old buses, and cars, with the color added attention-getting custom-Bilbo art that goes along with them.

Robert has recorded three albums, and he is featured in the 2015 documentary, I am the Blues.