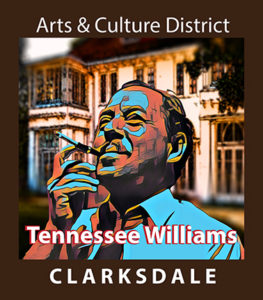 Family circumstance led young Tom Williams to spend much of his childhood in Clarksdale. He lived with his mother and grandfather, the Reverend Walter Dakin, in the rectory of St. George’s Episcopal Church, where his grandfather was the rector.

The area around St. Georges was Clarksdale’s oldest residential neighborhood.  It was Tennessee’s playground and a place of great influence on his later works and compelling characters.

Clarksdale’s Cutrer Mansion became his “Belle Reve” in A Streetcar Named Desire.  Its builder was “Blanche” Cutrer.  People who lived nearby were actually “Baby Doll,” “Big Daddy,” and “Brick”.

From here, Tennessee evolved into one of our country’s greatest playwrights.  He was exceptionally prolific, and among his body of great work was nearly 30 major American plays,  2 novels, 9 screenplays, two dozen short stories, more than 70 one-act plays and works in poetry as well.  Among his greatest works were The Glass Menagerie, A Streetcar Named Desire, The Rose Tattoo, Suddenly, Last Summer, Baby Doll, Camino Real and The Fugitive Kind.