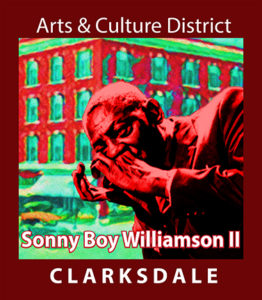 Aleck Miller was an exceptional blues harmonica player who became known as Sonny Boy Williamson II later in his prodigious music career.  Also a captivating singer and excellent songwriter, he recorded primarily in the ’50’s and ’60’s under various names, including both Rice Miller and Little Boy Blue, but he became mostly known as Sonny Boy II.  Like other Clarksdale associated bluesmen, his connections here were often and multi-fold: he played jukes and on our streets with Howlin’ Wolf and Robert Jr. Lockwood;  he also frequently played parties throughout the Delta with Robert Johnson, Wolf, Arthur “Big Boy” Crudup, Elmore James and others.  He often played on WROX radio in Clarkdale as well.

“Rice,” a nickname that came out of his childhood love for rice and milk, first recorded “Dust My Broom” with Elmore James.  Throughout his career, Rice also played across the country and frequently in Europe, where he played and recorded with the Yardbirds, The Animals, and Led Zeppelin’s Jimmy Page, among others.  His blues harp proficiency was a major influence to many, including: Paul Butterfield, Mike Bloomfield, Eric Clapton, Frank Frost, Howlin’ Wolf, Little Milton, John Mayall, Junior Parker, Snooky Pryor, Jimmy Reed and Jr. Wells.

Miller was born on a plantation in Tallahatchie County, Mississippi, less than an hour outside of Clarksdale. He first worked as a sharecropper with this stepfather.  By the 1930’s he had become associated with Big Joe Williams, Elmore James, and Robert Jr. Lockwood.  He also sometimes played with Robert Johnson during the early ’30’s as well.  Even back then, Miller was known to entertain with unique theatrics, such as playing his harmonica in his mouth with no hands.

By the turn of the 1940’s, Rice started playing the King Biscuit Time show on KFFA radio station in Helena, Arkansas, about 20 minutes from Clarksdale.  The radio show then included Robert Jr. Lockwood with him, and it was the program’s sponsor that began billing Miller as Sonny Boy Williamson II to capitalize on the fame of Chicago bluesman Sonny Boy Williamson I.

Just before 1950, Miller moved to West Memphis, Arkansas to live with his sister and her husband, Howlin’ Wolf.  He started his own KWEM radio show from there, where his musicians’ friends often played.  Elmore James, Houston Stackhouse, Arthur “Big Boy” Crudup, Robert Nighthawk were some who frequently played on the show with him.

Miller’s first solo recording session took place in 1951. He became a Chess Record’s artist by 1955, which much helped Rice develop a Chicago blues presence, especially as a member of Elmore James’ band.  Rice was touring Europe by the 1960’s, where he became involved with important British invasion rock n’ roll artists, who he played, recorded with, and appeared with on British television.  One amusing story appeared from that era in a Led Zeppelin biography; Sonny Boy set a hotel room on fire while trying to cook a rabbit in a coffee percolator.

Miller recorded about a dozen solo albums during his impressive career.  His songs were later recorded by some of the most influential musicians ever, including:  Muddy Waters, Canned Heat, Jr. Wells,  Howlin’ Wolf, B.B. King, Mose Allison, John Mayall, Led Zeppelin, Van Morrison, Mike Bloomfield and Al Kooper, The Allman Brothers, The Who, Gary Moore, The Blues Brothers, Johnny Winter and Taj Mahal.