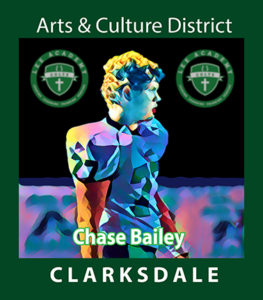 Chase Bailey (4/2/99-8/18/15) was so much more than a young powerful Lee Academy high school football player and towering basketball player; he was a life-affirming inspiration to us all.   His athletic abilities would have likely continued in college; however, those that knew him and those that he touched along his journey to Heaven remember him for so much more than that.   A life cut short by cancer, Chase faced his grim prognosis with these spirited words; “why would I wish away something (cancer) God allowed for a reason?”

Chase’s true strength, courage, and faith unveiled before our eyes through a cancer diagnosis as a young teenager.  During his 16 ½ month battle with cancer, Chase’s character, perseverance, strength, courage and faith, inspired many.  Courage is strength without fear.   It is a choice to confront pain, agony, uncertainty, and/or death without fear.  Courage is having faith that you can overcome any difficult situation.  It is bravery in the face of adversity, whatever the challenge may be.  Chase learned as he faced the most difficult challenge in his life to live by the verse Joshua 1:9 “Have I not commanded you? Be strong and courageous. Do not be afraid; do not be discouraged, for the Lord your God will be with you wherever you go.”   Chase was a good student and a good athlete with the world ahead of him until all of that changed instantly on April 7, 2014.  This was the day that Chase received the life-changing phone call that he had Osteosarcoma, a rare form of bone cancer.  This was also the day that courage and faith began to define him.   Chase was a normal teenager until cancer struck him and changed his life overnight.  It was then as Chase faced his death with strength, courage and faith that his family and friends, the Clarksdale community and many others witnessed a normal teenager become an extraordinary man during his battle with cancer.  Chase had no idea that a continuous pain in his right hip would later be discovered to be cancer. Thankfully, Chase was spiritually prepared for the battle ahead and never turned his back on God.   During Chase’s battle with cancer, he never complained and never lost hope.   He made a conscience decision to continue to trust the Lord with his life no matter what.  His faith and relationship with the Lord was strengthened daily through many difficult days fighting cancer and being told, you are no longer fighting to get back on the football field you are fighting for your life.   Chase was a laid back fun loving guy.  He never lost his sense of humor and sparkling smile and he continued to keep a selfless attitude.  Chase always put others first even as he faced his own death.  Chase was a friend at all times, he encouraged others by his actions and always kept a positive attitude.  Chase was a role model showing us all how to live a strong, courageous and faithful life under extreme adversity.

Chase’s complete story can be found at https://www.caringbridge.org/visit/chasebailey