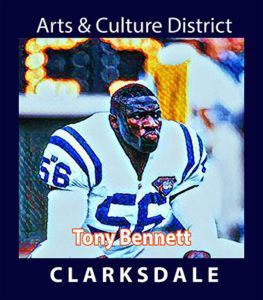 Born a few miles outside of Clarksdale, Tony Bennett was a National Football League professional football player.  His teammates often called him “Alligator” Bennett, a nickname that came from his football intensity and the small-town place where he was from.

An acclaimed linebacker and sometimes defensive end, Tony was known as a fierce hitter with good speed and an excellent pass rusher.  He played college ball at The University of Mississippi and was a first-round draft choice of the Green Bay Packers in 1990.  After four years with the Packers, Tony played an additional four more years with the Indianapolis Colts.

Among his NFL accomplishments when he retired, he was 4th on the all-time Green Bay sacks list; he had 452 career tackles, 65 sacks, and 19 forced fumbles.