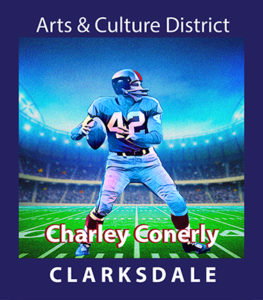 Charles Albert Conerly Jr. was the quarterback for the New York Giants in the National Football League (NFL) from 1948 through 1961.  He was a two-time Pro Bowl selection in 1950 and 1956 and was NFL’s Most Valuable Player in 1959.  He led the Giants to three NFL Championship games in four seasons (1956, 1958–1959) and in 1958 he was the Giants quarterback against the Baltimore Colts in what is known as the greatest NFL game ever played.

Conerly also had a distinguished college football and baseball career at the University of Mississippi.  He led Ole Miss to their first SEC championship in 1947 and led the nation in pass completions that year as well.  He was a consensus All American and was Player of the Year.  In 1966, he was inducted into the College Football Hall of Fame in 1966.  As an Old Miss baseball player, he hit .467 in 1948 and was offered a professional contract.

Charlie (or “Charley” as his first name was spelled on most of his career football cards) was also the first “Marlboro Man” in television commercials.   After his football career, Conerly and his wife, Perian (author of the book, Backseat Quarterback) retired to Clarksdale, where he owned shoe stores throughout the Mississippi Delta.