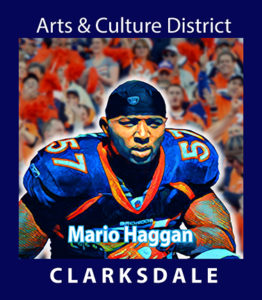 Mario Haggan is a former National Football League linebacker.  He grew up in the Clarksdale and attended Clarksdale High School, where he was a first-team All-American football player in Mississippi.  He also played in the Mississippi/Alabama All-Star Game and led his team to the state Class 4A championship in 1997.  In his senior year, he earned Honorable Mention, All-American honors by USA Today.

Mario was both a linebacker and defensive end at Mississippi State University.  He played on the State SEC Western Championship and on the Bulldogs 1999 team that led the nation on defense.  While at MS State, he played in the SEC Championship Game, the Cotton Bowl, the Peach Bowl, and the Independence Bowl, and he was a first-team All-SEC selection by the Associated Press and second-team All-America honoree by The Sporting News.

Mario was drafted by the Buffalo Bills in 2003 where he played for five years.  In 2008 he signed with the Denver Broncos and played there for four more years.  Among his career stats, Mario had 282 tackles, 9 sacks, 1 interception, and 8 forced fumbles.