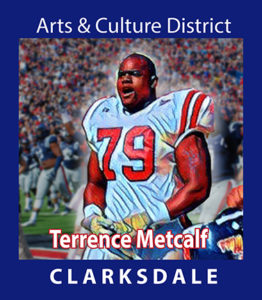 Clarksdale born Terrence Orlando Metcalf had a distinguished career in both college and professional football.  He was an All-American from the University of Mississippi in nearby Oxford, MS, and he played for the Chicago Bears throughout his professional football career.

In school in Clarkdale, Terrence was a Parade Magazine high-school All-American.  His father and brother also played in the National Football League, and his son played football at the University of Mississippi as well.

Terrence was a third-round draft selection for the Chicago Bears in 2002.  He played for seven years with the Bears and played in the 2006-07 Super Bowl.