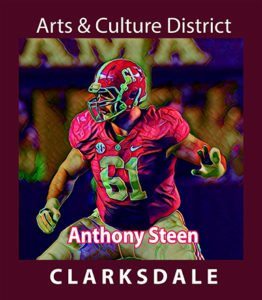 Anthony Steen is a professional football player in the National Football League.  A starting center for the Miami Dolphins, Anthony played high school ball at Lee Academy in Clarksdale.

He had numerous football scholarship offers from prestigious universities before selecting Alabama to play college ball.  At Alabama, he became a starting guard for the Crimson Tide and was honored with a second-team All-Southeastern Conference selection.  There he was three-times a member of a BCS national championship football team and twice a member of an SEC championship team.

Steen first professionally played with the Arizona Cardinals before becoming part of the Miami Dolphins, where he is currently a starting left guard.