ESPN College GameDay aired Charley’s sign… after being displayed for only three days on E Second Street in Clarksdale! 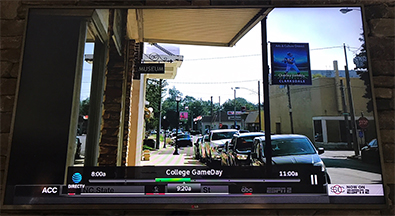 The Charlie Conerly sign is located on E. 2nd Street near what was formerly known as the headquarters of  Conerly’s Shoe Store that served the Mississippi Delta for decades. Charlie owned and and ran shoe stores throughout the Mississippi Delta after his retirement from professional football.

The sign was hung on a Wednesday, and three days later it was featured in a television short about Charlie on ESPN College GameDay.  The subject of the video retrospective was that “Roach”, as Charlie was referred to by his closest since youth, is the greatest football player ever… to not be named in the National Football League Hall of Fame.