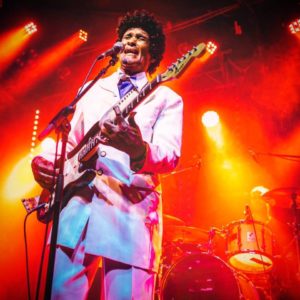 (CLARKSDALE – via Cat Head Delta Blues & Folk Art)  One of the last Mississippi Delta bluesmen of his generation has passed. 80-year-old ROBERT “BILBO” WALKER has moved on to his beloved Promised Land. The duckwalking, zoot-suited blues-rocker had been undergoing cancer-related treatments in California since his King Biscuit and Clarksdale’s Cat Head festival performances last month. In today’s early morning hours, he let go.

For those who never saw the incredible wig-wearing blues character or were unable to attend the grand-opening of his amazing Wonder Light City juke joint back in June, here is a lovely video vignette produced by CNN: