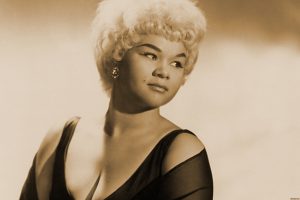 Etta James, most often remembered for her signature song, ‘At Last’, which reached No. 2 on the Billboard R&B chart, died from complications of leukemia at the age of 73. She also placed nine other songs in the American Top 40, won three Grammy Awards and was inducted into the Rock and Roll Hall of Fame in 1993.
Credit: Michael Ochs Archives / Redferns
Agency: Redferns