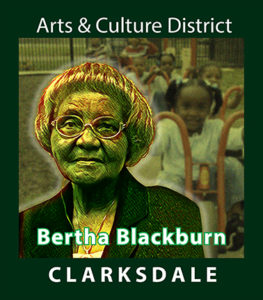 (from The Clarksdale Press Register, by Taylor Mitchell)  In everyone’s lifetime, there comes a person who is very special and unforgettable and that person was Bertha Maiden Blackburn.

Bertha Maiden Blackburn was born in Wilkinson County, MS in 1924. In 1927, her father and mother moved the family from Wilkerson County “just ahead of the high waters” or the flood of 1927 and settled on a plantation in Sherard, MS. She was only three years old, not old enough to know that she was born a poor sharecropper’s daughter and how those circumstances might determine her future role in life. As she recalled, “Life was good and if you’ve never had it, you don’t know that you are poor.”

Her early education began in one room at Sycamore Grove Church in Sherard where she completed first grade through the eighth grade. She later attended and graduated from Aggie High School and then earned a Bachelor of Science Degree in Economics from Alcorn A & M College in 1948. She was the first in her family to finish college. She later returned to Coahoma County and proudly said, “I had always vowed that I would come back and give back to the people of Coahoma County that helped me along the way”. Bertha Blackburn did just that as an instructor in home economics in the Clarksdale city school system for 16 years. Former students to this day use her as a measuring stick for the importance of restarting home economics as a course in the local high school.

“Bertha” as she was called by many of her friends, kept that commitment to such a degree that she was the recipient of many awards. She received humanitarian awards and the “Heartbeat of the Community Award.”

The award that touched her the most was “Citizen of the Year” from the Clarksdale/Coahoma County Chamber of Commerce in 2005.

She was employed at COI in its Head Start program in 1965 as a nutritionist. “Since she was highly respected in her field, she became a nutrition consultant for other Head Start programs,” said Ed Seals, executive director of COI. “Mrs. B had to be escorted by law enforcement personnel to Head Start programs in rural areas of Georgia and Kentucky so that she could do her job of setting up nutritional programs. Although she was met with hostility, she wouldn’t be denied.”

COI human resource director Jimmie Ann Sellers said, “Mrs. Blackburn was a dedicated professional, totally committed to making a difference in the lives of people and this community. She was a remarkable human being, and a model employee of Coahoma Opportunities, Inc.

“Her commitment to COI did not stop with her role as nutrition coordinator. She started a cannery where she taught classes in preserving and canning vegetables grown in the area. Bertha Blackburn developed training and recruitment classes for the Food Service area and was the brainchild of the Taste of Clarksdale which is now an annual event to support the Retired Senior Volunteer Program (RSVP) in Coahoma County. She was a part of every struggle at COI.

“To say that we will miss her is an understatement. She was one of those rare employees who was loved and respected by every person associated with the Agency. We will forever owe a debt of gratitude to Mrs. Blackburn for her outstanding service to Coahoma Opportunities, Inc,” Sellers concluded.

A Life of Service documentary