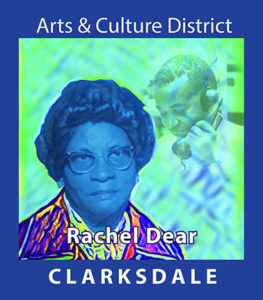 Rachel Parker was a civil rights and social activist in Clarksdale.  The aunt to Clarksdale area bluesman, Junior Parker, Rachel was also a cousin to Clarksdale civil rights leader Dr. Aaron Henry.  She was an early member of the NAACP, and it was Dr. Henry caused Rachel to become involved in the civil rights movement.

Rachel was the married mother of a large family.  She held several jobs as a homemaker and a worker within the Clarksdale Public School System.  She was also a well-known community leader with the Silent Grove M.B. Church.

Her home was located around the corner from Dr. Henry’s well-known drugstore;  she regularly marched with him, and she and Dr. Henry were both arrested from time to time for their civil rights participation.

At one point, Dr. Martin Luther King, JR came to Clarksdale to speak at one of the churches with Dr. Henry.  His life became under threat, and Rachel was asked by Dr. Henry for help to get Dr. King safely out of town, which she did in the wee hours of the morning.  Shortly thereafter, Rachel was arrested by the Clarksdale police, but by then Dr. King was safely gone.

Often Rachel would take her children to local civil rights meetings; she insisted they become aware of equal rights and justice and the freedom struggle.  In reflection after that difficult civil rights era, Rachel had no regrets; her main interest was in helping others for a better life ahead.