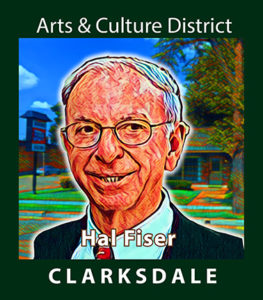 Hal Fiser was a longstanding Clarksdale businessman that was also well known for leadership throughout the community.

Hal was born in Kentucky.  He graduated from Murray State University and got his master’s degree from the University of Mississippi.  He moved to Clarksdale in 1950 to teach high school science and to coach basketball.  He later served in the United States Army.

He married Harvey Ross Young and soon after he found interest in the real estate and insurance business. He opened the Hal Fiser Agency to serve Clarksdale for more than sixty years.

In addition to his business and civic interests, Hal contributed much to Clarksdale’s social life. He was a founding member of the Higher Mathematics and Art Appreciation Club, a local poker group. Hal and Harvey could occasionally be spotted dancing to the blues music of Super Chikan celebrating the rich culture of the Mississippi Delta.  Throughout his life, he was also known by many in the community for gift deliveries and visits on Christmas eve.