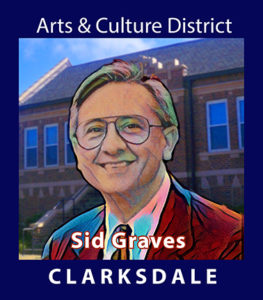 Perhaps more than any other, Sid Graves was responsible for reconnecting Clarksdale with its remarkable blues legacy.  He was the director of the Carnegie Public Library, and there he founded the Delta Blues Museum in a one-room schoolhouse in 1979.  His significant cultural contributions did not stop there, however.  He also founded the Tennessee Williams Festival in Clarksdale as well.

Graves received his Master of Library Science degree from the University of Mississippi and Peabody College.  His undergraduate work was at Millsaps College.  Sid also served as director of the South Mississippi Regional Library System in Columbia and as president of the Mississippi Library Association. He was also an accomplished poet as well.

Sid Graves was awarded the Governor’s Award for Excellence in the Arts in 1996, and he received the Blues Foundation’s Keeping the Blues Alive Award in 1989.