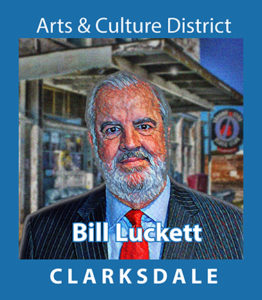 Former Clarksdale Mayor, Bill Luckett, has made significant contributions to his hometown in law, business, art, and his progressive support of advancements in civil rights.  A 1973 graduate of the University of Mississippi Law School, he currently practices with Luckett Tyner Law Firm, which has offices in Clarksdale and Sumner, Mississippi.

Luckett’s entrepreneurial endeavors include Ground Zero Blues Club, with partner Morgan Freeman, and management of his real estate holdings. He was elected Mayor of Clarksdale in 2013.

Bill is a frequent lecturer at attorney seminars, and a frequent speaker for civic clubs, tourist groups, and universities. He has been recognized by Martindale-Hubbell for receiving its highest possible rating in both legal ability and ethical standards. He has also been named to the Mississippi Super Lawyer’s list as one of the top attorneys in Mississippi since 2012.

Luckett has received the May Fest Trailblazer of the Year award for his outstanding and significant contributions to diversity and racial reconciliation.  He holds a Lifetime Membership in the NAACP.  He also served on the professional advisory board for ALSAC, St. Jude Children’s Hospital in Memphis Tennessee.  He is married to the former Francine Gardner of Greenville, Mississippi. They have four children.