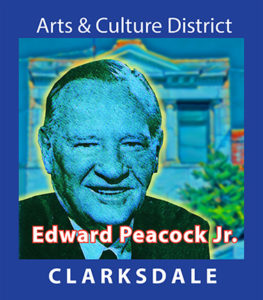 Ed Peacock, Jr. was the Chairman and CEO of the Bank of Clarksdale.  Founded by his father, Ed Peacock, Sr., the bank was one of the first ever found in the city.  A civic and business leader of respect and distinction, Ed started at the Bank as a cashier after graduating from college.

Ed attended both the University of Mississippi and Vanderbilt University.  His work at the family bank started upon graduation.  After a decade of banking experience, however, Ed served in WWII with distinction from 1940 to the end of the war.  Reaching the rank of Lt. Colonel, he served in the South Pacific, primarily in the New Guinea and the Philippines campaigns.  His service was honored with the Bronze Star, two Oak Leaf Clusters, and the Combat Infantry Badge and Air Medal.

After the war, he returned to the Bank of Clarksdale before becoming its leader five years later in 1950.  During his four-plus decades at the bank, the bank grew into one of the largest financial institutions in North Mississippi, and the 8th largest bank in the State.  Ed was also a President of the Mississippi Banker’s Association and various responsible offices in the American Banker’s Association.  He was also involved in family farming interests and was a Director of Delta Wholesale Hardware.

Throughout four-plus decades of being one of Clarksdale’s preeminent bankers, and retirement thereafter, Ed was much known and respected for his community leadership as well.  He was the first president of the Clarksdale Young Businessmen’s Association; he was active in the Coahoma County Chamber of Commerce, the Delta Council, and the Rotary Club.  Ed also served as a Director of the Northwest Mississippi Regional Medical Center.