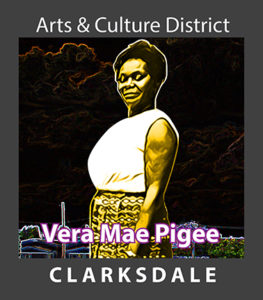 Vera Mae Pigee was a significant civil rights activist and leader in Clarkdale.  Throughout the tumultuous civil rights era in the early 1960’s, which included the Freedom Rider era (they were near but not actually in Clarksdale), Ms. Pigee was both a peaceful and fierce integrationist.

A beautician and beauty shop owner by trade, she helped civil rights activist Aaron Henry to organize the Clarksdale chapter of the NAACP, which became the largest chapter in the state of Mississippi.  She was both Aaron Henry’s and the NAACP’s chapter secretary, and also an advisor to the Mississippi state NAACP Youth Council.

Under Ms. Pigee’s leadership, young African American members of the Youth Council entered the white-only section of Clarksdale bus station in protest.  They attempted to purchase tickets and Ms. Pigee was arrested.  On her release, she and other Clarksdale women returned daily in peaceful sit-down protest.  After appealing to the U.S. Department of Justice, and threatening a lawsuit, then Clarksdale Chief of Police Ben Collins removed all signs of segregation in the bus station.  Ms. Pigee had integrated the Greyhound Station!

Ms. Pigee consistently held meetings, educational classes, literacy drives, voter registration, and other civil rights gatherings in her beauty parlor.  Back then a beauty parlor was a woman’s sanctuary; men did not go there.  As such, Ms. Pigee was hiding so to speak in plain sight, and her important civil rights efforts continued in her beauty store successfully, unabated and without violent incident.

Vera Mae earned a doctorate in journalism.  She chronicled her work with the NAACP in her book, Struggle of Struggles: Part I.