The new tribute to Elvis being mounted in front of the Clarksdale Civic Auditorium, where Elvis played 4 times from 1954 to 1955.

To help understand where Elvis was in his career ascent in late 1954 and through 1955, his first recorded song, “That’s All Right” was recorded on the 5th of July, and released on July 19, 1954 (it was written by a previously Clarksdale based musician Arthur “Big Boy” Crudup, and the B-side of the single was “Blue Moon of Kentucky”).

Elvis’ fifth record, “Mystery Train”, was released on August 20, 1955  (it was also written by a Clarksdale area musician, Junior Parker, and became the first record that put Elvis on his way to becoming a well known country music star).  The musicians on most all of these first Elvis releases were Scotty Moore on guitar and Bill Black on stand-up bass.

Starting with “Heartbreak Hotel” on January 27, 1956, all of Elvis’ other big early hits, those that established him as a rock and roll phenomenon were released throughout 1956 and into 1957 as well.  As it relates to Elvis performing in Clarksdale, he was booked and marketed here as a country music performer;  he was not well known at the time, and Elvis the rock star had certainly not happened yet.

Elvis’ known Clarksdale performances were at the Civic Auditorium at 506 East Second St.  It was originally built in 1939 with funds in part from the Works Project Administration. The facility has two meeting rooms and the auditorium has a seating capacity of about 1,500 people.

According to unsubstantiated reports by Bill E. Burk in “Early Elvis: the Sun Years”, he reputedly played in the Clarksdale Auditorium sometime in late 1954.  Burk wrote, “perhaps the worst attendance was Elvis’ first appearance in Clarksdale, Mississippi, just down U.S. Highway 61 from Memphis, in the heart of the Mississippi Delta.  Martha Coleman said at the end of his first perfomance in late 1954 in Clarksdale, Elvis said he wanted to ‘thank all three of you for comin’.'” 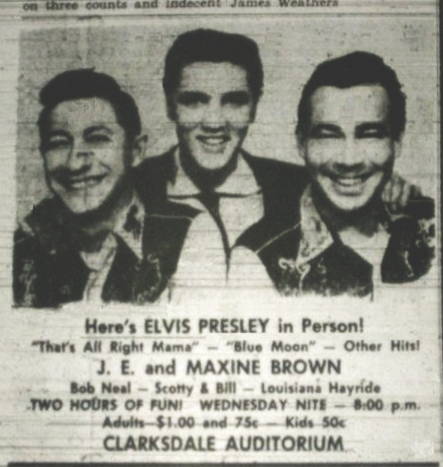 Peter Guralnick wrote in “Elvis Day by Day” that the January 12th show marked the known beginning of two weeks of touring with Jim Ed and Maxine Brown (The Browns).  Bob Neal has booked the tour and appeared as MC at all those shows. The Browns were a highly polished brother–and–sister country act and they were the most well known draw on that small tour.

Bob Neal, had also recently taken over as the band manager, and also shared the stage as a comedian. The Browns though had previously been billed with Elvis as early as in December ’54 just across the Mississippi river in Helena, Arkansas.

The Browns had first worked with Elvis, Scotty and Bill at the Louisiana Hayride in 1954.  The Browns were already members of the Hayride and the Shreveport-based radio show because of their recent hit, “Looking Back to See.” 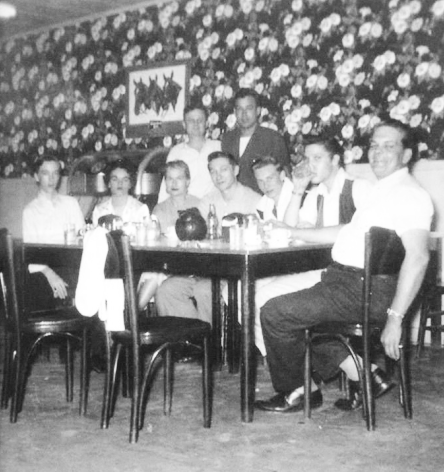 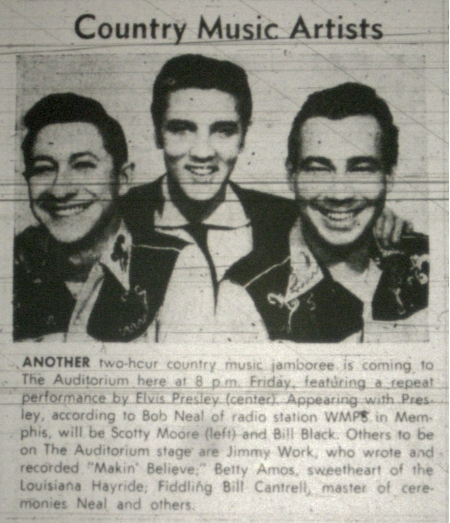 On March 10, 1955, Elvis, Scotty and Bill performed again at the Civic Auditorium. According to Lee Cotten in “Did Elvis Sing in Your Hometown?,” the show again featured humor from Bob Neal and songs from Jimmy Work and Betty Amos. It was emceed by “Fiddling” Bill Cantrell, apparently a local favorite back then. 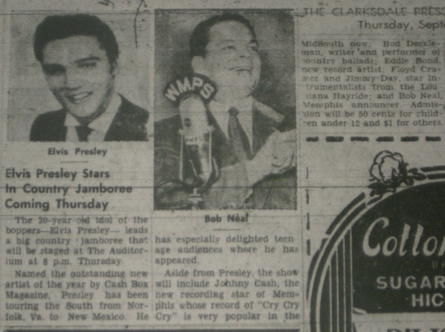 On September 8th, 1955, Elvis, Scotty and Bill performed at the auditorium in Clarksdale for the last time. This show also featured Johnny Cash, new to SUN Records with his growing hit “Cry Cry Cry.”  Tickets cost $1.00 for adults and .50c for kids.

This is the publicity write-up for the show in the Clarksdale Press Register:

“Elvis Presley Stars in Country Jamboree Coming Thursday – The 20 year old idol of the boppers – Elvis Presley – leads a big country jamboree that will be staged at the Auditorium at 8 p.m. Thursday.
Named the outstanding new artist of the year by Cash Box Magazine, Presley has been touring the South from Norfolk, Va. to New Mexico. He has especially delighted teen age audiences where he has appeared.
Aside from Presley, the show will include Johnny Cash, the new recording star of Memphis whose record of “Cry Cry Cry” is popular in the MidSouth now; Bud Deckleman writer and performer of country ballads; Eddie Bond, new record artist; Floyd Cramer and Jimmy Day, star instrumentalists from the Louisiana Hayride; and Bob Neal, Memphis announcer. Admission will be 50 cents for children under 12 and $1 for others.”