New photographs were taken of the City of Clarksdale at large at City Hall about 10:00 am on Monday.  Also the City staff was photographed in groups:  The Mayor and Commissioners, the Police Department, the Fire Department, Public Works and the City administrative staff. Photos were shot by Troy Catchings from the Clarksdale Press Register […] 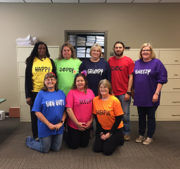 Trick or Treat at City Hall

The City of Clarksdale participated in the Downtown Halloween Trick or Treat on October 31, 2017.  The City had two very big boxes full of candy for the children, and they got it all!  The widespread event was a big success, and happy children were everywhere! City Clerk Cathy Clark says more treats will have […]