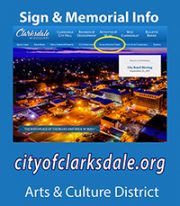 The Arts & Culture District project was originally slated to be 33 signs, and most of those were focused on the music and musicians that gave us the birthplace of the blues.  Some of the artists in the original mix, Willie Brown for example, are much known to music historians and intrepid blues fans, but […]